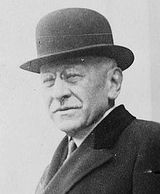 Julius Rosenwald
The unlikely partnership between a Jewish immigrant turned businessman and an African-American educator spawned nearly 5,000 schools across the United States.

They were called Rosenwald Schools. Their namesake, Julius Rosenewald, owner of Sears, Roebuck and Company, offered matching dollars to black communities to build schools in the rural south. Booker T. Washington, educator at the Tuskegee Institute, accompanied him. From 1913-1932, nearly 5,000 schools were built, serving over 650,000 children.

The school's educated African-Americans until the landmark Supreme Court case, Brown v. Board of Education of Topeka (Kansas), determined that separate schools for black and white children was unconstitutional.

Today, many these schoolhouses are demolished, taken over by weeds. Some serve new uses as community centers or museums. Very few Rosenwald Schools remain and very few remember the men who pioneered education for blacks at a time of "separate but equal."

Stephanie Deutsch, author of You Need a Schoolhouse chronicles the relationship between Rosenwald and Washington and their mark on education. Deutsch's husband, David, is a descendent of Rosenwald. After learning this, she became intrigued by Rosenwald's philanthropy and good will.

Deutsch traveled to many remaining Rosenwald schools from Kentucky to Tennessee to research for her book. Along the way she met community advocates and former students who wish to preserve the rich history. 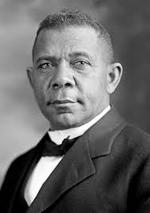 Booker T. Washington
Deutsch met people like Russell Mack, a former student at the Russell School in Durham, N.C. He is working with the Friends of Russell to renovate the old schoolhouse.

"I'm proud that I went to school there. That was the only school around here for minorities. We didn't know too much about the white schools at the time. The Russell School was about all we knew," said Mack.

He recalled the memories made from first to third grade; school lessons, playing in the yard, warming the stove during the winter and eating a hominy grits at school.

"During that time, you really got your lesson. Mrs. Rogers didn't play. I got a wooping too; because I didn't know how to spell automobile on the spelling test," he said. "I learned all of my times tables, I could spell and I could really read. We got some pretty good education out here."

The Friends of Russell is one of the few non-profit organizations that are trying to bring new life to the old buildings. The Russell School is the only remaining Rosenwald School in Durham, N.C. The Tar Heel State once housed the most schools, at 787. The Russell School has been dubbed one of the best preserved schools in the region.

"I think it's something that the next generation needs to know about. They say if you know where you've come from, you'll know where you'll go," said Mack.